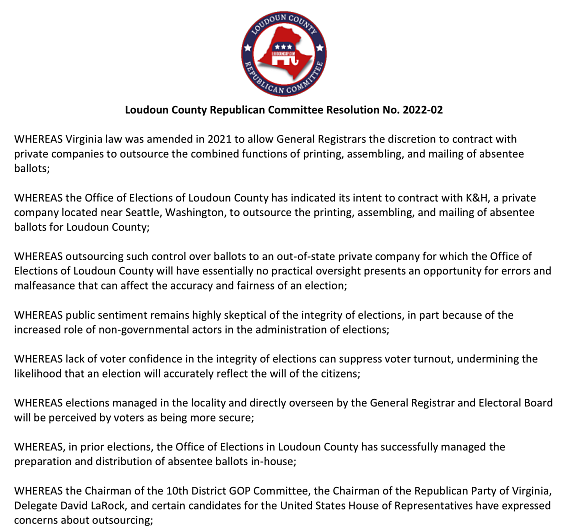 WHEREAS Virginia law was amended in 2021 to allow General Registrars the discretion to contract with private companies to outsource the combined functions of printing, assembling, and mailing of absentee ballots;

WHEREAS the Office of Elections of Loudoun County has indicated its intent to contract with K&H, a private company located near Seattle, Washington, to outsource the printing, assembling, and mailing of absentee ballots for Loudoun County;

WHEREAS outsourcing such control over ballots to an out-of-state private company for which the Office of Elections of Loudoun County will have essentially no practical oversight presents an opportunity for errors and malfeasance that can affect the accuracy and fairness of an election;

WHEREAS public sentiment remains highly skeptical of the integrity of elections, in part because of the increased role of non-governmental actors in the administration of elections;

WHEREAS lack of voter confidence in the integrity of elections can suppress voter turnout, undermining the likelihood that an election will accurately reflect the will of the citizens;

WHEREAS elections managed in the locality and directly overseen by the General Registrar and Electoral Board will be perceived by voters as being more secure;

WHEREAS, in prior elections, the Office of Elections in Loudoun County has successfully managed the preparation and distribution of absentee ballots in-house;

THEREFORE, the Loudoun County Republican Committee strongly urges the General Registrar of Loudoun County to not outsource any absentee ballot functions to any private entity—and, in particular, not K&H—and instead to continue to manage the printing, assembly, and mailing of absentee ballots in-house; and

FURTHER THEREFORE, the Loudoun County Republican Committee strongly urges the General Assembly to repeal the 2021 amendments so that General Registrars no longer may outsource the combined functions of printing, assembling, and mailing of absentee ballots, and in particular not to out-of-state entities. 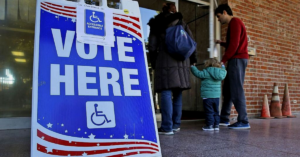